My optimism for assimilating the African languages was dashed early on in my service here. Having always felt I had an affinity for language, I was in for a rude awakening when attempting to seriously study Chichewa. Malawi s official languages are English and Chichewa but there are at least a dozen other dialects and languages spoken throughout the country, particularly in rural villages along borders with Tanzania, Zambia, and Mozambique. At times even the students are unable to translate for me when we have patients that speak Swahili or other rarely heard dialects.

That said, one of the most important features of Malawi culture is greeting people. So my efforts in language acquisition have focused on mastering the greetings. Further complicating the issue is that one never knows which language to greet in! If I am in Lilongwe, I can be pretty certain that Chichewa will work. In Mzuzu where I live, most people speak Tumbuka, but also speak Chichewa. The locals get frustrated if you speak Chichewa and want you to greet in Tumbuka!

On weekends, I often go to Nkhata Bay on Lake Malawi where they speak Tonga. So do I offend by offering my greeting in Chichewa? Or Tumbuka? When in Rome, do as the Romans .so I have been striving to at least learn the basics and actually now, feel pretty confident that I have mastered the essentials.

I have been so fortunate to be living in Mzuzu, the largest city in northern Malawi. It is cooler here, less congestion, more trees, and generally safer, though overall Malawi is a pretty safe country. Directly outside the rear gate to the campus is the most beautiful dirt road that has given me the opportunity to run through the villages and farmland in the very early morning hours.

It took me about a month to summon the courage to step outside the back gate, alone, and explore this road that was beckoning me to continue my lifelong passion for running solo in nature. I am much more content experiencing the endorphins and the calorie busting this activity provides.

Day by day, I would advance my distance just a bit once I felt safe to continue, that no one would jump out of the bushes or maize fields to accost me. I know this sounds paranoid, but really, running alone on an isolated dirt road in the middle of Africa seemed a daunting prospect for me.

Now, I am happy to report I can run for 30 minutes out and 30 minutes returning back to home on campus. The boogy men have stayed away and the villagers have become quite accustomed to the azungu woman running by in the early hours. I begin at 5:45 mostly because it is light enough, cool enough, and there are fewer people out to stare at me. 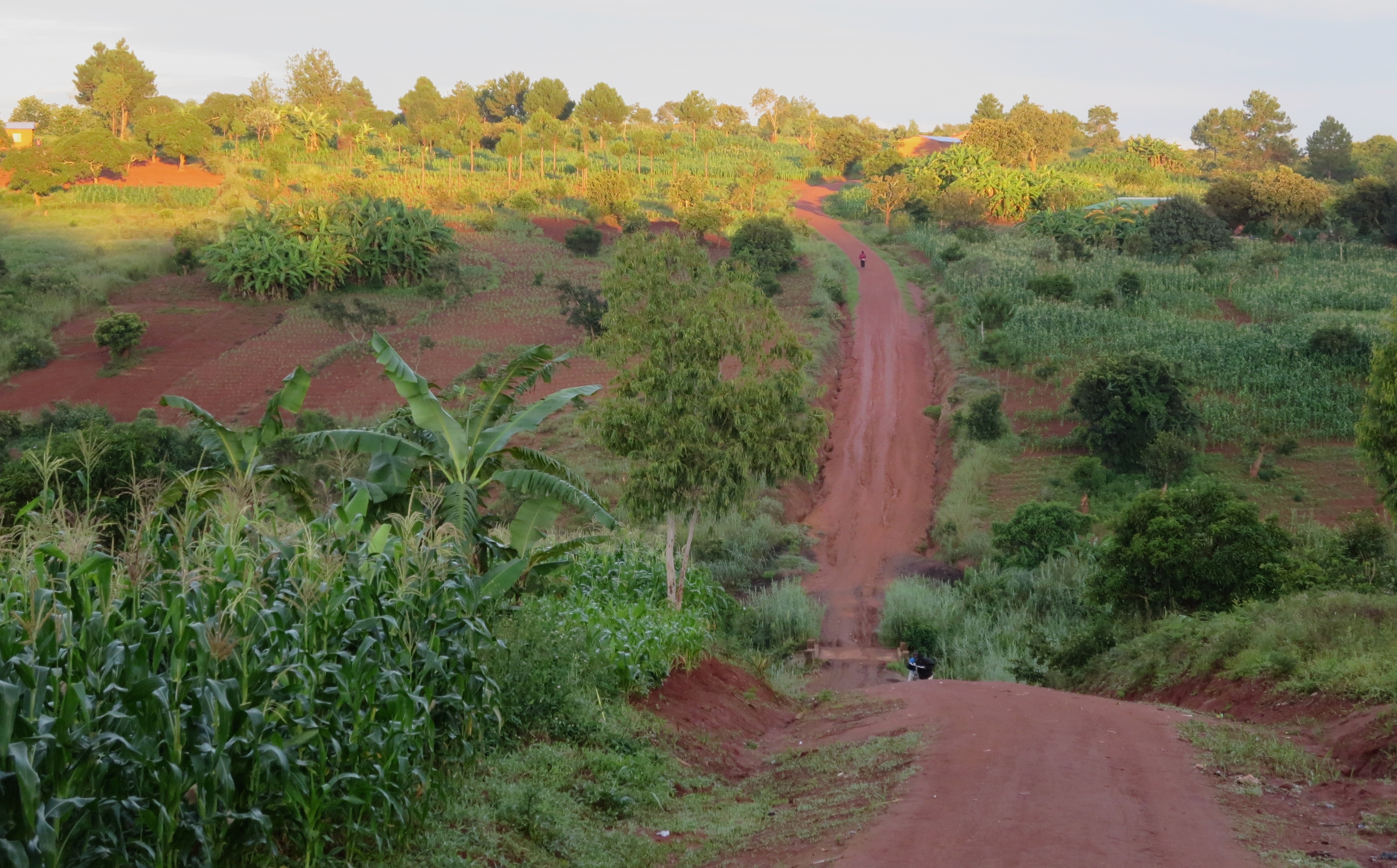 The road is traveled by some walking to work, while others carry water from the bore hole, and often entire families will carry their hoes on their way to the fields. Already by this hour, many men and women are tending their crops with their hoes.

The children walk to school in small groups, carrying their thin, fragile, blue plastic bags holding their snacks and their plastic cup for water during the day. They all wear uniforms in varying degrees of cleanliness and repair. Many are sucking on mangos or sugar cane as they shuffle on to school which is at least 1-2 KM from home. Most are largely unimpressed with my activity and are so shy they will not even acknowledge me when I greet them or make eye contact, but others will shout at me from their homes calling, Azungu, azungu!

By now, I am a curious but well-established sight in the morning. Most probably wonder what the hell would inspire me to run up and down the steep and dusty hills, unaccompanied. Of course, I have been well advised to run in loosely fitting capris, and a full T-shirt so as not to horrify the locals by having too much skin exposed. The challenge for me is what language to use when greeting the people along the way. Do I use Tumbuka, Chichewa, or English. I have played with the variations, not wanting to offend anyone and by now am able to discriminate and choose a language accordingly.

Here s a sample of morning greeting in Tumbuka:

To further complicate my language processing, I have intermittently studied Afrikaans. Though challenging, I actually enjoy learning this one and find it a bit easier than the tribal languages which are largely incomprehensible to me when someone is speaking fast. I am heading to Cape Town in a week so am hoping to practice my Afrikaans while in South Africa.

One thought on “LANGUAGE”