Never in a million years did I imagine that I would spend Christmas Eve on safari in Africa, over 7000 miles away from home. Carrie and I arrived in S Luangwa, Zambia on the 22nd after 2 grueling days of travel through Zambia from Victoria Falls.

Croc Valley Resort is perched on the Luangwa River along the perimeter of the National Park. With luxury tents, chalets and camping accommodations the safari resort offers a respite from the heat of the day after traveling on game drives in the early morning and late afternoon.

We have ventured out on 2 morning game drives (breakfast at 5:30) and 2 late afternoon drives at 4:00. The drives are 4 hours long and feature a tea break 3 hours in.

Food is plentiful and delicious and the scenery is peaceful and lovely, watching the enormous hippos snort and play in the river.     During the evening hippos, antelope and at times elephants wander into the campsite to graze.

Monkeys and baboons are everywhere. You have to be alert and quick as in the morning the small monkeys leap onto the table to steal food right out of your hand! Smart and crafty, they will note when you leave your seat and skirt the table to take advantage of your departure. 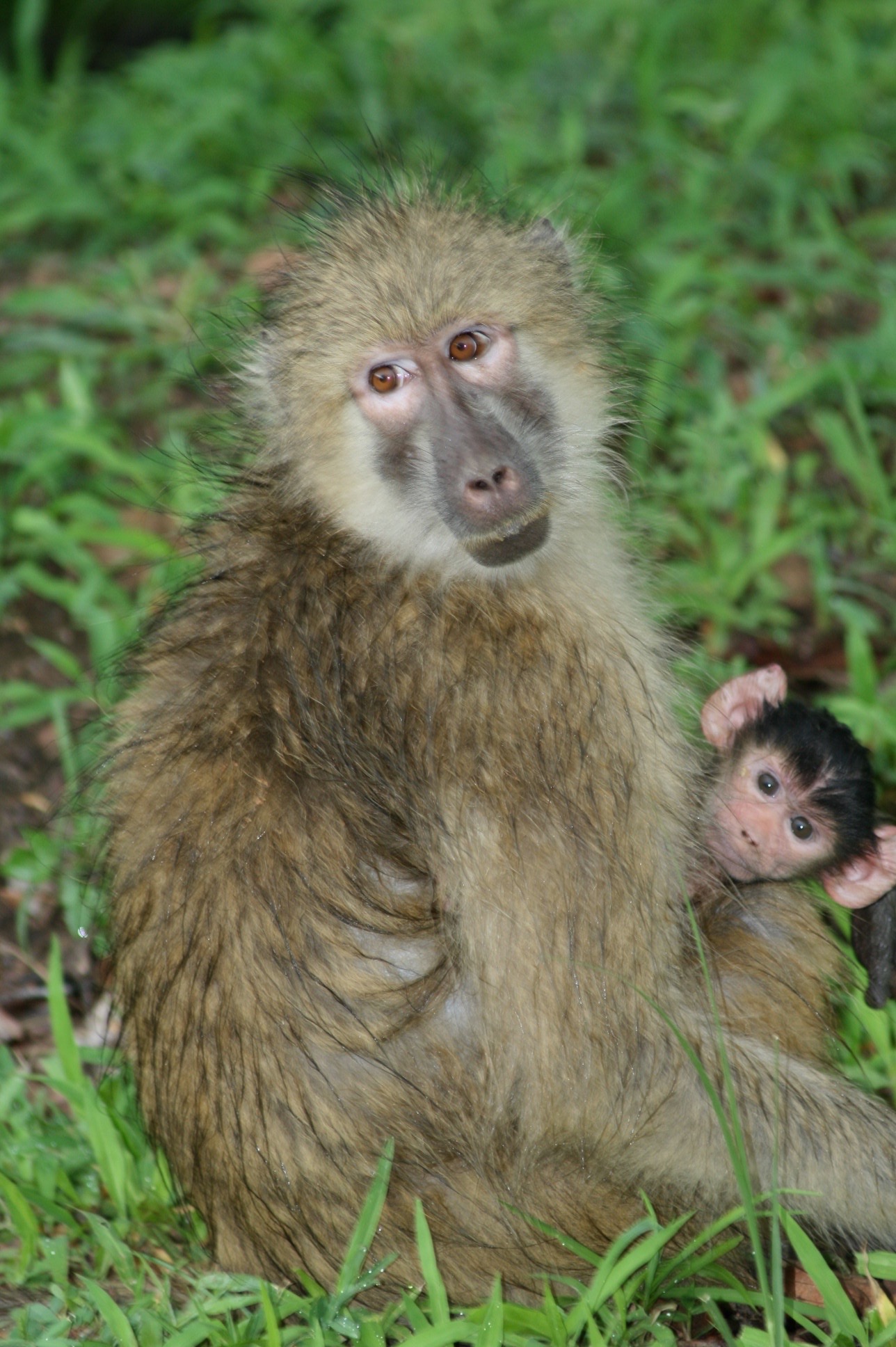 The game viewing has been absolutely breathtaking. By far the most outstanding drive was Christmas Eve morning. We came upon a pair of mating lions lounging under a large tree just off the road. Our guide, Kalima, stopped so we could observe and take photos. Breathtakingly beautiful, the lion pair was actively engaged in a mating ritual which we were privileged to observe first hand. 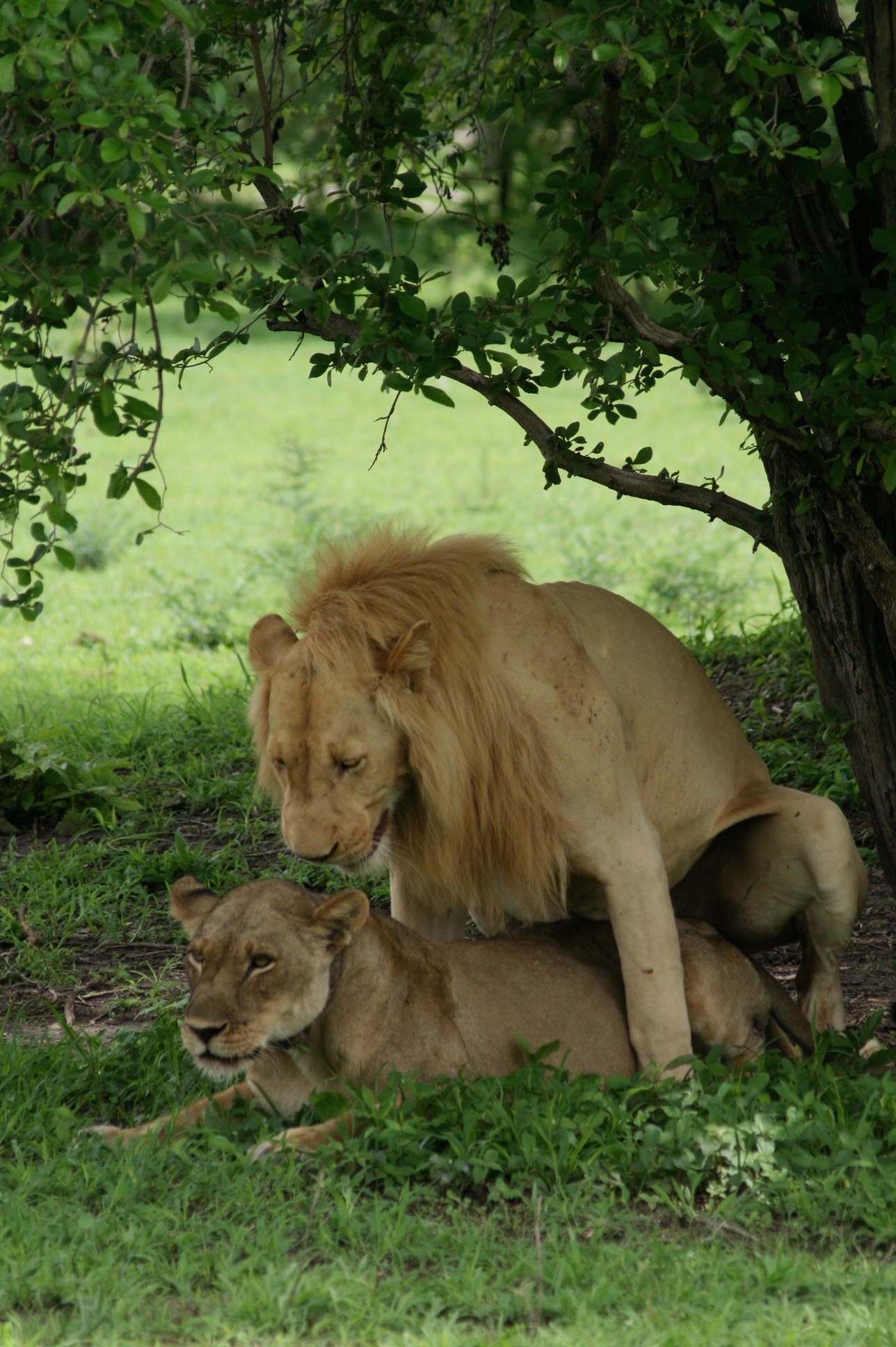 The pair segregates themselves from the pride for 4-5 days during which time they actively mate every 10 minutes or so for this entire time. Their coitus lasts about 10 seconds after which they growl and carry on and collapse on the ground and rest. It brought tears to my eyes as I felt so awed by the scene and the privilege of watching such beauty and intimacy in the wild.

We came upon a second pair of females lounging on the cool rocks in the bush just after our tea break. We could approach them in our jeep and got within 20 feet of them to photograph.

On our return, we stopped again to observe the mating pair and this time Kalima drove off road and up to within 15-20 feet of them. Though not allowed to do this, there were also 2 other vehicles that had driven up close to witness this amazing site. The pair mated just as we parked up close and personal, completely uninterested in our approach. Now, bear in mind, this is an open jeep and the guide is not armed.

Then, disaster! As we prepared to leave, our jeep got stuck in the mud. The other vehicles had departed, leaving us alone.     Both lions were watching us closing, literally within 20 feet of the jeep. Kalima was trying to rock the jeep in and out of the mud to no avail. Six humans in the jeep all thought simultaneously, Which one of us is going to die. This was a very serious situation. I was terrified. We all stayed completely still. I hid behind my camera, reclined as if taking photos. No one moved a muscle or spoke.

Kalima was unable to exit the jeep to lock the wheels due to the proximity to the lions. His strategy (planned or not) was to rock it and make as much noise as possible with the engine. It worked. The female stood up and began slowly walking away. The male rose and followed her, gazing over his shoulder at the pathetic humans stuck in the mud.     We paused, still as statues until they were 50 yards away. Kalima got quietly out of the truck to lock the front wheels. After another 2-3 minutes of rocking and roaring, we were able to depart from the mud.

Every single one of us looked at each other and gasped sighs of relief; definitely the scariest moment of my life. I truly thought one of us would die or suffer some vicious attack.

Our evening drive was marred by rain and high winds, though we still ventured out and saw some hyenas and the usual bands of zebras, a baby elephant, and a gennet cat. Returning home to a cold shower, ugh, I donned my fleece jacket and shoes and socks to enjoy a delicious dinner Roy prepared on the braii for our return at 8 pm. Seated by the river under a thatched shelter next to a bonfire in a wheelbarrow, we feasted on beef tenderloin, potato salad and Greek salad for our Christmas Eve dinner.

So grateful to be here and enjoying this beautiful continent, and my daughter s company.

One thought on “Near Death on Christmas Eve”